No, it’s not the long awaited sequel, Writing the Pilot: Five Great Pilots. That’s still in progress…pretty much at the same pace as the next Song of Ice and Fire. But until George R. R. Martin does figure out how to finish his epic story after killing off just about every interesting character — I mean, until my sequel is done — this new book is a great accompaniment to the first volume.

If you’ve read Writing the Pilot, you probably remember that the book’s center is devoted to an analysis of the process Lee Goldberg and I used in adapting Aimee and David Thurlo’s Ella Clah character into a pilot for CBS. It’s a step by step guide to the choices that we had to make in figuring out how to turn a series of books into a TV series, and I think it’s a pretty good demonstration of the kind of work that goes into writing any pilot.

The only thing that was missing for me was the fact that while you could follow our thoughts up to a point, you couldn’t see what they added up to. Because, alas, the pilot was never shot and the script existed only on our hard drives (and possibly in a storage closet at the network).

Until now. Until this: 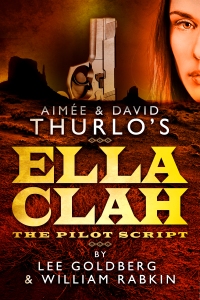 Our pilot script is now a book, Aimee and David Thurlo’s Ella Clah: The Pilot Script. And not only the script, but the pitch/treatment we used to sell the project, the story areas for future episodes we included when we turned in the script, and a brand new introduction by Lee and me, along with a new forward by the Thurlos.

It’s available at Amazon for the Kindle for only $2.99 — where it is currently #6 on the list of television screenwriting books, just four places back from Writing the Pilot — and if the beautiful edition I just received in the mail is any indication, it’s about to be available in a gorgeous paperback.

11 thoughts on “A New Writing the Pilot book!”